Creating a Bail for a Pendant


First and foremost, it is important to measure around the clasp of the chain you will use for your pendant to dictate the circumference required for your bail.  Before you start bail construction.  If you have a special clasp you want to slide in and out, then:

Bail Circumference
Measure around the clasp with a soft measuring tape the minimum length required to comfortably slide the clasp in and out and then that should give you the length of X-wrap to make before creating the loop.


Basic Bail Construction
The basic concept of the bail is to craft about 3 cm (1.25 inch)  OR REQUIRED LENGTH BASED ON YOUR CLASP MEASUREMENT of the X Wrap.  Then bend the wrap around a small round object until the start of the bail section touches the beginning.  Use some of the coiling wire to secure the loop closed.

Don't worry, as I am typing this article out, I have decided to do a separate tutorial on how to create a basic bail - where you can feature any preferred wrap.  For now I will show examples of what I have done in the past.


Creating a bail is often something I forgot to think about when I started creating pendants.  Hence they became a single core wire coiled and looped around from the front of a setting to the back and anchored securely. 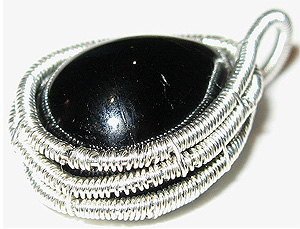 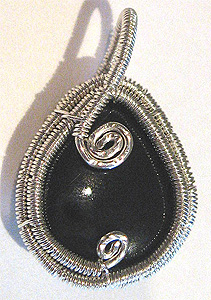 The trouble with this technique is when you have a beautiful complicated pendant, sometimes that simple style of bail seems a bit of a wimp out!  Although the last end of the bail can help secure a stone in place if you find the setting is still a bit loose.


An amazing tutorial by wire artist Remy Heath of Studio Heath teaches a great way of doing a bail built into the structure of her complicated woven pendants.  I love her tutorials but it does end up giving you many wire ends you have to terminate somewhere and still end up with a tidy looking project which does not suite a small, simple design.

My favourite wrap to use as a bail is the X-Wrap Weave (my free tutorial link here) as it creates a very complicated yet pretty bail to add elegance to any project. 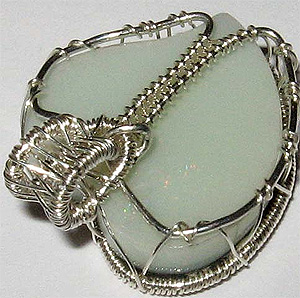 Here is an example of the X wrap as a bail.  In this pendant, I actually started with the bail first.  I took a long length of 0.8 mm (American 20) gauge wire and bent it in half around the flat needle nose plier teeth.  Then crafted 2.5 cm (1 inch) length of Xwrap weave and bent that around a thin knitting needle to make a complete loop. 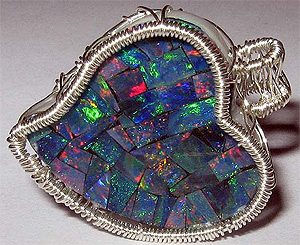 I tucked the two ends back through the top of the bent start and then continued with the rest of the project.

It is also important to plan if you wish to have the back of the pendant sit flush to the body, or at angles.   In this pendant, the bail will rest against the body and slant the stone down at an angle. It was done as it captured the better angle of the mosaic opal front better. 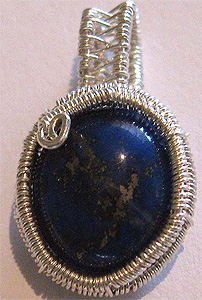 Another example of the X Wrap as a bail constructed in the middle of the Bezel Setting Tutorial on my site.  For this bail, I literally started with the bail first and then continued with the top half and then bottom half of the bezel setting technique to trap the lapis lazuli cabuchon. 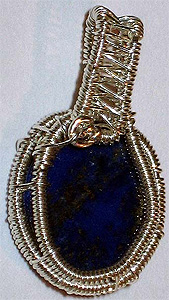 
After that is finished, bend the X wrap bail around a round object until it creates a complete loop, and use part of the thinner wire to secure the start and end of the Xwrap bail together.  Then continue with the bottom half of the bezel setting.  I prefer to bend the bail towards the back side of the pendant as sometimes the connection is not so seamless, as you can see in the back side photo of the same lapiz lazuli pendant.

Notice this bail sits higher in the back and leans up over the top of the stone.  This particular bail was made so the back of the pendant would sit flush to the body. 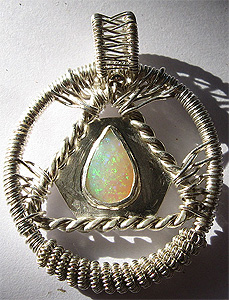 For the bail in the circular pendant, the bail core wire came from the start and the finishing end of the outer circle.  I took a length of sterling 1.0 mm (US 18) gauge wire and created a perfect circle around a pvc pipe and overlapped the start and end by .5 cm (about 0.25 inch).  Then bent both ends of the wire 90 degree angle to the circle plane.

0.4 mm gauge wire was then used to coil once completely around the entire circle - ensuring to coil between the 5 mm gap to fix it in place.  Then I did 3 cm of X wrap on the bail and bent it towards the back. 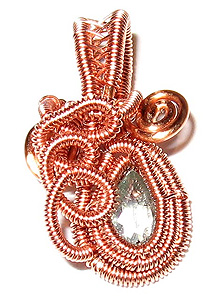 This pendant features the smallest stone I have been able to set yet, a 7 mm x 5 mm faceted pear shape green sapphire stone.  I used coated copper wire from an electronic enthusiast hobby supply store so it will not tarnish.

The bail core wire was 0.8 mm gauge and coiling wire 0.4 mm gauge.  The bail wires became part of the spirals and coiled curly decoration to hide some of the uglier anchoring sites underneath.  The bezel setting core wire was thinner 0.6 mm gauge.

Sometimes it is easier to trap the stone separately from the bail section and literally sew the two individual components together with wire at the end. 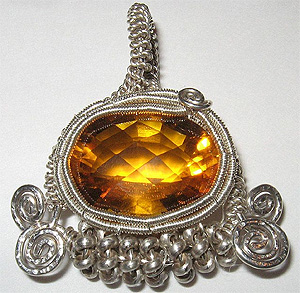 In the orange pendant photographed, I literally crafted the whole pendant in 3 separate sections.  The bail top is a coiled wire section bent in the middle to create the large loop held shut by additional wire (so the loop will not open up again).  The second section is the individual stone in its bezel setting wrap.  The third section was the large coiled bead on the bottom.

I then literally used 0.3 mm gauge wire, and the spiral ends linked together of Bail and large coil bead sections, together in the end. 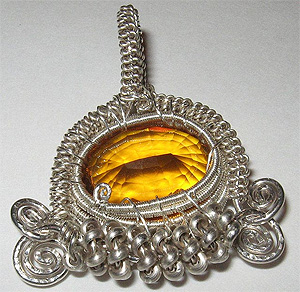 A photo of the back shows more of the wire stitching.  It also shows the back side of the bail.  You can just see one section of the twisted coiling wire that looped around securing the bail loop closed.

Hopefully by now you see that crafting the bail can be so much more than just buying a manufactured finding, or just a plain loop of wire.  I have only shown a few ways I have crafted bails - you are only limited by your imagination!