In 2008 I took a fabulous Precious Metal Clay Workshop with Rose Marie Christison in South Denver, Colorado who conducts these workshops in her own studio. I would highly recommend doing a course with her to get a solid knowledge and confidence for working with PMC. She teaches more than just pmc, have a look on her website is www.rosiesriginals.com

This article is my discovery of how to create a precious metal clay mould for an organic odd shaped item; mine being the stick that is left after the palm seeds have fallen off. This will not cover how to use Precious Metal Clay, rather how to test your moulds to ensure the desired effect is reached before destroying clay!

As with everything, have your work station set up neat with all items you will require to make the process easy. Spend the time getting to know every tool, chemical and rehearse the order before hand. Also, when creating the two halves, you want them to overlap and have some quirky ridges so the halves won't slide around when you are trying to mould the precious metal clay.

Create First Half of Mould

Read your compound instructions carefully and don't throw them away like I did! There will be a set "mixing time" and then the compound will start setting - be very aware of this and do a few test balls first while watching a second hand on a clock to know how the compound works.

At first I was having trouble as the mould compound was setting looking like a kitchen sponge, which made my mould rough and lost a lot of detail. The sponge look can result for a few reasons
a) the two parts are NOT very close in amount (weigh them!)
b) OR your mould compound is too old and has gone off (who would have thought rubber can have a shelf life!)
c) OR You are mixing the two parts for too long and the compound is trying to set
d) OR each part is not at its optimal temperature for use
e) or a mixture of all 4 reasons.

Mine was a mix of reasons a, c and e so after some more test runs I figured out that I couldn't mix past 20 seconds, had to warm up the separate parts for a while and "eyeballing" the amounts didn't work for me.

After your mould compound is mixed, lay it out into a nice long half circle that is deeper than your object. Carefully press the found object in HALF WAY INTO THE MOULD. Using a flat plastic ruler can

help press the object evenly into the moulding compound. You have one chance to get it right and cannot fiddle with the object while the mould is setting so resist the urge to lift the object out right away.

Lightly press a finger nail into the base of the mould to test the setting process. The mould is set when the fingernail mark no longer stays in the mould. After the mould is set you can take out the found object - be careful if it is a dry stick so that it doesn't break making the second half of casting difficult.

Cast the Top Half of the Mould

Lay a single small sheet of plastic wrap (Saran Wrap) entirely over the bottom half of the mould. This will prevent the second mould section sticking to the bottom half. (I learned the hard way.)

Carefully put the found object back into the bottom half of the mould until it sits snugly in place.

Mix more compound together than for the bottom half and place over the object so:
a) completely covers found object without gaps
b) top half slightly overlaps the bottom edges of the bottom half of the mould

Once the top half is squarely seated, leave it alone until the mould is completely set.

Ensure that top half will "lock" down onto bottom half with the overlapping portions so that the mould will not slide when casting the pmc. If not, recast the top half.

COAT ALL PARTS OF THE MOULD WITH OLIVE OIL! This will keep any clay from sticking to your mould.

Testing the mould with a cheap clay, plastacine, polymer clay or even p

laydough (as I used here) lets you know if you are happy with the mould detail of the found object without wasting precious metal clay. It also will give you an idea of the volume of pmc required with minimal wastage.

You can see that I did not coat the mould with olive oil before squishing the test clay. Your clay can stick to the mould if not coated, ruining the casting.

I rolled the clay into a little round strip which was a little bigger than the original section of stick and pressed it into half of the mould. In the photos to the right you can see how the top half of the mould has a little cap that will fit over one end of the bottom.

Press the two halfs together until firmly fitted together. Carefully lift out the test clay from both sides of the mould.


If you're happy with the results,

clean the mould of any of the test clay, recoat with olive oil and go for it in Precious Metal Clay! 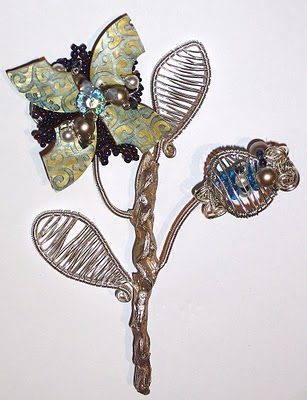