I have wanted to do a complex pendant that incorporates a number of weaves I have on my free tutorials page.  Half to show off how the weaves can work so well together in a project but also as a challenge for myself to step up the game.  The other goal was to create a pendant where the back is as appealing as the front, since many I've done definitely have a back side to remain hidden.

One artist I always admired was able to trap a faceted stone in what looked like the Basket Weave.  I've thought long and hard on the revere engineering of it and finally came up with the idea to combine the Basket Weave with the X-Wrap weave.

I started with 0.6 mm core wires and 0.3 mm coiling wire. For basket weave, half round wire is 1.0x0.5mm. I wanted a wire base that was fine and easy to mould with my fingertips.  I used the three core wires to create a base or dish that the stone would sit in with X-wrap modified for 3 wires.  I had to V-shape the middle one to create a pocket for the point of the stone since it isn't a flat cabochon.

I got so busy doing the top part of the wrap that I totally forgot to take a in step photo.  8 times. =P
The idea here is the half round top wires from the Basket Weave are used to set the stone in place.

On top of the stone where the X-wrap ends, I anchored the coiling wire around the half round wire to the underside base.  You can see the anchor points in the photo below.

The back of the stone setting is really interesting too.  I also found as I progressed into a more complex pendant that the middle wire makes a great place to anchor or terminate other wires inconspicuously. 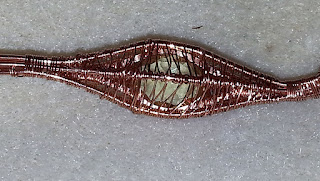 Here are the actual original 3 stones I started with, three amethyst faceted ovals.  I put a lemon quarts oval on each side to keep practising with different sized stones. 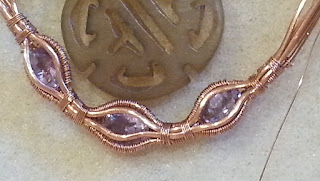 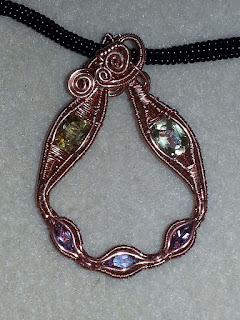 The stones look green here, but the larger ones are yellow quarts faceted oval stones.  I also found the narrow basket weave sections made for great bending points.  After folding this one up, I fell in love with the shape of the negative space and decided to finish off the pendant as is. 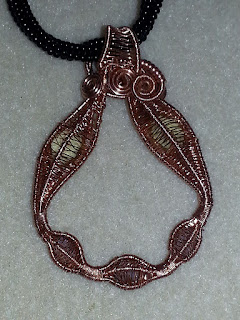 The back is as interesting and appealing as the front.

Onto the next pendant, because originally I wanted to put the Jade carving into a pendant with the purple stones.  So I hit my stone stash and found a tans/browns combination for a new pendant idea.

I got a bit carried away again and forgot to take photos.  10 hours later... 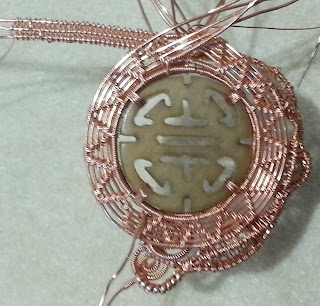 1st. I captured the jade stone in a 3 round bezel setting.  I used 0.6 mm core wire and the 0.3 mm coiling wire again.  The bezel frame was attached to the jade carving disk on the final rotation on compass points.

2nd: I should have done the sunray / Zig Zag circular weave incorporating the core wire from the bezel setting - this would have given me 8 wire ends to play with.

What I actually did next was to get straight into the stone setting Basket weave concept because I was so keen on it.  So the bezel setting core wire was joined with 2 more core wires, the 2 half rounds and coiling and off I went.

So the 8 ends of the Sun Ray/Zig Zag circle joined with the 9 wires from the basket weave settings to make 17 loose wire ends I then had to tidy up. 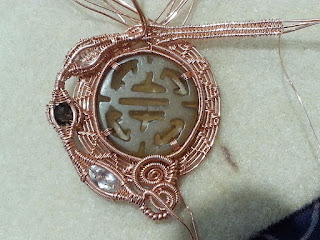 Oh, the sunray / zig zag circle weave is one I learned form the Nicole Hanna Arabian Nights tutorial I posted about in January 2017. I modified her 6 wire one to a 4 wire one for sanity sake.  It ended up being a great base to which I could anchor other features or terminate wires.

This is now representing 15 hours of work. 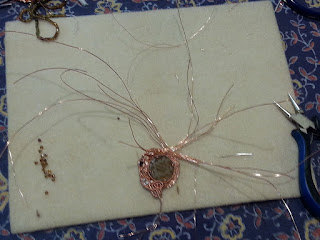 Here is the 17 armed septendec-apus in all its messy, spaghetti bowl glory.  I was reminded a bit of Medusa or the live Devil's Snare vines from Harry Potter books when I kept getting coiling wire caught up in it all. 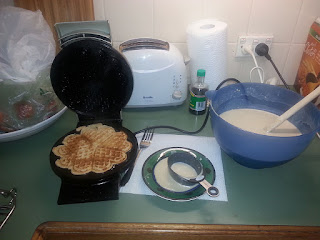 And sometimes hard work is interrupted by things like family or hunger.  Waffles seem to sooth both....

The next step was to start taming those 17 wires.  I love weaves that use up a lot at once.  A 3-core Figure 8 used 3 nicely.  I also used a 2-core weave also learned in Nicole Hanna's tutorial - the weave one top right in the below photos. 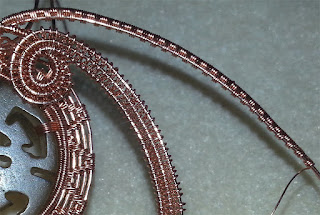 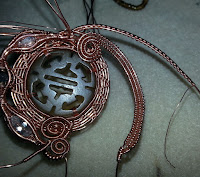 And covering up enough wire to be decorative is one thing.  But the ends!  What to do with the ends!!  In the case of the 3-core Figure 8 weave, I coiled 2 core wires around one.  Start with the core wire nearest the um, Live wire I guess?  Then snip.  The take the further core wire and keep coiling around the live wire - using coiling wire to hide things. I used that one wire to coil around the base of a spiral. 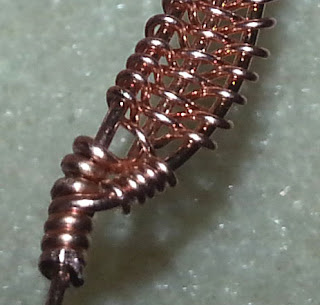 Spirals are also a GREAT way to not only use up wire ends, but as anchor points.  In the photo below, both spirals are working overtime.  The beginnings have half round wire ends coiled up neatly.  I also coiled another core wire on top of the half round coil on the top spiral in photo below.  Spirals are  also a great place to anchor ends of wires and then HIDE those spots.  They should be locked into place though or they can catch on things and unravel.  I've used a spiral to lock another one in place in below right side photo. 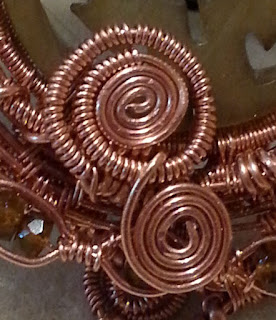 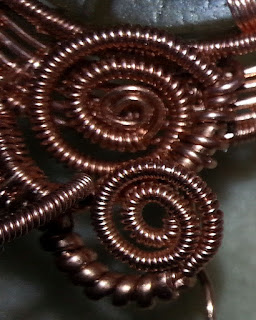 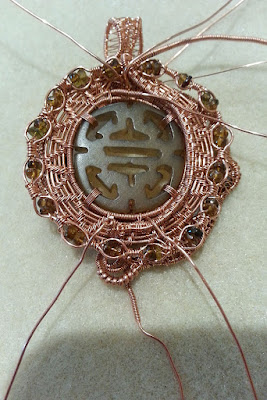 On one side, I used another 2 core wires (0.6 mm ones) to accent Tourmaline beads threaded on a 0.4 mm wire in a circle.  This is to decorate the side without the set faceted stones.

The 2-core Nicole Hanna weave was brought to the this side too since it was looking a little plain compared to the opposite side. 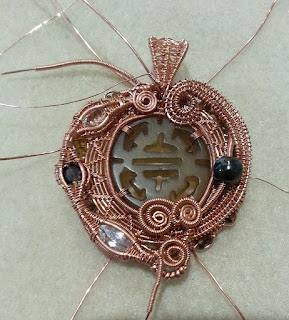 On the "front" side, there was the 3 set faceted stones.  The 3-core Figure 8 was chunky enough to balance the stones on the other side. I wanted a bit of dark on both sides of the pendant so I used another end to coil and trap a boulder opal bead in place to balance the dark smokey quartz.

If you compare this photo to the right to the front above, you will notice an additional spiral at the bottom.  This is the final end of the 3-core Figure 8 decoration.  There is also a new spiral at the top which anchors the bail closed.


3 more wires became the base of a 3-core X-wrapped Bail, but I kept the ends poking out on both sides of the pendant to use in spirals to hide the base of the bail which was looking a little rough on both sides.

The final front of the pendant.  Another curly wire on top but otherwise finished. 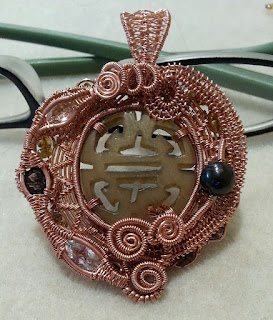 The final back side of the pendant.  I balanced the 2-core Nicole Hanna weave on the right with a single core wire coiled with 0.4 mm wire and then another 0.6 mm core wire loosely coiled.

The bottom spirals are working overtime with about 5 other wires wrapped around them at the base - then hidden underneath.  All up, both pendants represent about 35 hours of work. 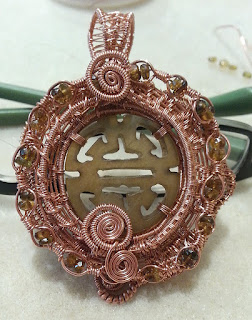 Posted by amandajewls at 5:29 AM No comments: